With the introduction of all kind of options in their filers NetApp provides several ways to plan for your data consumption. In this article I'll discuss a few of the most confusing options and clarify them and their interaction with each other by showing an example.

Note: Since Operation Manager 3.7 this option might be referred to as 'Overwrite Reserved Space'.

Fractional reserve is a volume option that determines how much space Data ONTAP will reserve for Snapshot overwrite data for LUNs and space-reserved files to be used after all other space in the volume is used.

This variable is set at the volume level and is set as a percentage of the volume. Data ONTAP removes the defined percentage of volume from being available for configuring LUNs or for file usage with CIFS or NFS. As Snapshot copies need space, they consume space in the snap reserve area. By default after the snap reserve area is filled, the Snapshot copies start to take space from the general volume. Of course, because of WAFL write anywhere technology, snap reserve doesn’t actually reserve specific physical blocks for Snapshot usage and can be thought of as a logical space accounting mechanism.

To understand the interaction between snapshots, reserved space, and volumes/LUN read the example below. In this example 'lun reserve', 'fractional_reserve', and 'snap reserve' all have been left at their default values. 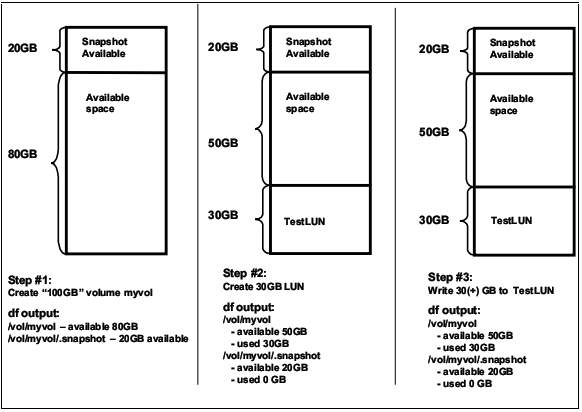 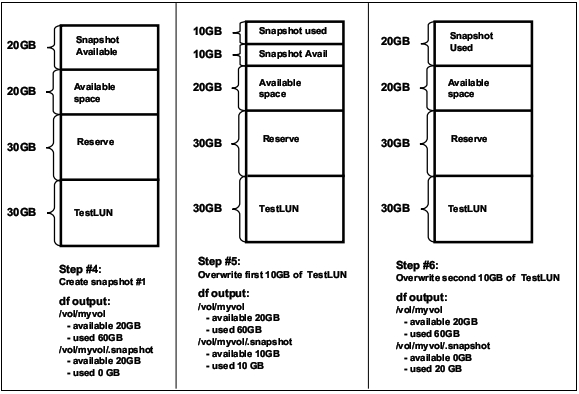 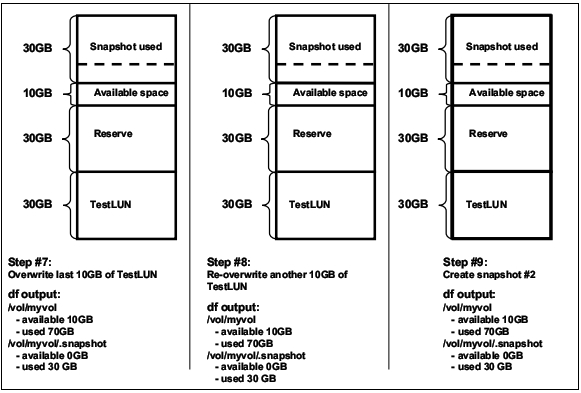 Note: This option is also known as Autogrow

This volume setting (available in Data ONTAP 7.1 later) defines whether a volume should automatically grow to avoid filling up to capacity. This option is available only for flexible volumes. It is possible to define how fast the volume should grow with the '-i' option. The default growth increment is 5% of the volume size at creation. It is also possible to define how large the volume is allowed to grow to with the '-m' option. If volume autosize is enabled, the default maximum size to grow to is 120% of the original volume size.


It is strongly recommended to set the trigger to volume.
The order in which Snapshot copies are deleted is determined by the following three options:


The algorithm to determine which Snapshot copy to delete will first look for a Snapshot that does not lie in the 'defer_delete' criteria and use the 'delete_order' to determine whether to delete the oldest or more recent Snapshot. If no such Snapshot copy is found, the 'defer_delete' criteria will be ignored in the selection process. If a Snapshot copy is still not available for deletion, then the SnapMirror and dump Snapshot copies will be targeted depending on the 'commit' option. Snapshot copies will stop being deleted when the free space in the trigger criteria reaches the value of the target_free_space variable, which defaults to 80%.
If both autosize and autodelete are enabled and the autodelete trigger is set to 'volume', the 'try_first' volume option will determine whether a volume grow or Snapshot copy delete will be attempted first.

The big advantage of this configuration is that it takes advantage of using the free space in the aggregate as a shared pool of available space. Since a guarantee of volume is being used, a different level of thin provisioning per application can easily be achieved through individually sizing the volumes and tuning how much each volume is allowed to grow. Space usage is also very easy to monitor and understand by simply looking at the volume and aggregate usage.
As with all configurations using a shared free space, the volumes are not 100% independent of one another since they are competing for that space when they need to grow. Meaning that if other volumes have already consumed the space in the aggregate it might not be possible for a volume to grow.
Care needs to be taken if clones (FlexClone or LUN clones) are being created as Snapshot copies which are backing this clones cannot currently be deleted by the autodelete functionality. This risk can be avoided if the volume is sized at 2X or greater of the LUN size and there is only one locked snapshot.

These are the commands on the commandline of the filer to set the options from the best practices guideline we use:

Note: Please note that the volume name is case sensitive.


Note: These are the available options for snap autodelete:

The best practice outlined above is for volumes with snapshots enabled. In our environment that counts for all volumes containing boot luns, and for the vol0 volumes. Also volumes with snapmirror enabled will have snapshots although those snapshots will be automatically maintained and do not need further configuration.

This is the snapshot configuration as we use it:

The weekly snapshot might grow considerately over time so monitor the amount of space occupied by the snapshots.

Above article is a simplification especially for my knowledge and environment from this pdf.

hardware, storage, netapp
You could leave a comment if you were logged in.
netappdataplanning.txt · Last modified: 2021/09/23 22:24 (external edit)