This story is a follow-up on Vmware CPU Management and will show you how to find performance issues regarding memory.

When troubleshooting memory performance the most important thing to find out is whether your host is having memory issues (as in you overcommitted memory and need to add more memory to the host) or whether the problem is restricted to the VM (as in you need to allocate more memory to the affected VM). If the host is affected you can notice pretty fast because of the predefined VMware Alarms in vCenter. This however, is just an indication of percentage of memory allocation, not whether this is a problem. To dive into the problem, we need performance graphs.

Memory Graph for a Host

Perform the following steps to create a real-time graph for a host's memory usage:

This is an example of a Memory Graph for an ESX host that is quiet: 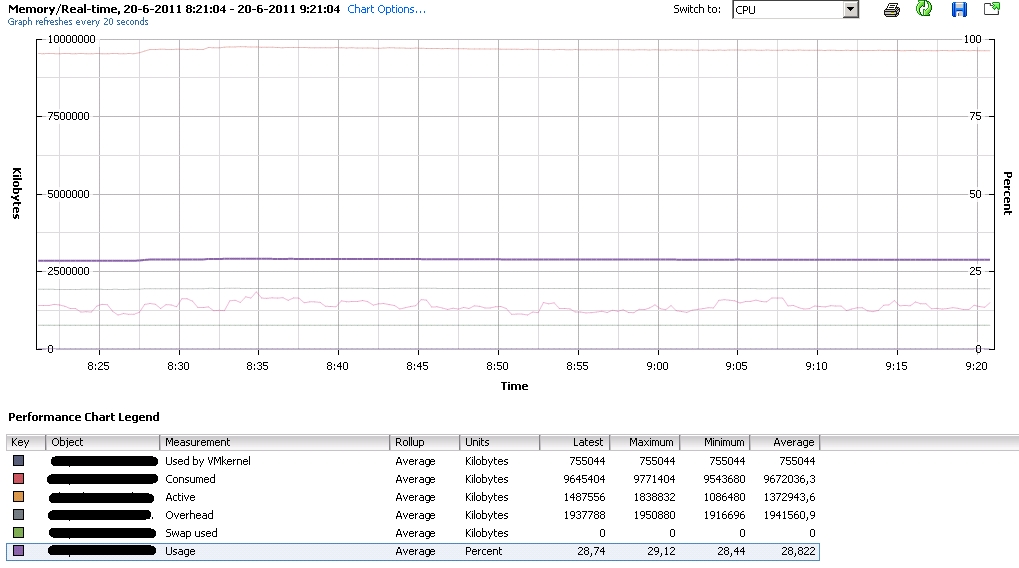 This is an example of a Memory Graph for an ESX host that is busy (as in a high usage percentage):

This is an example of a Memory Graph for an ESX host that is busy (and that's ballooning, swapping and compressing memory): 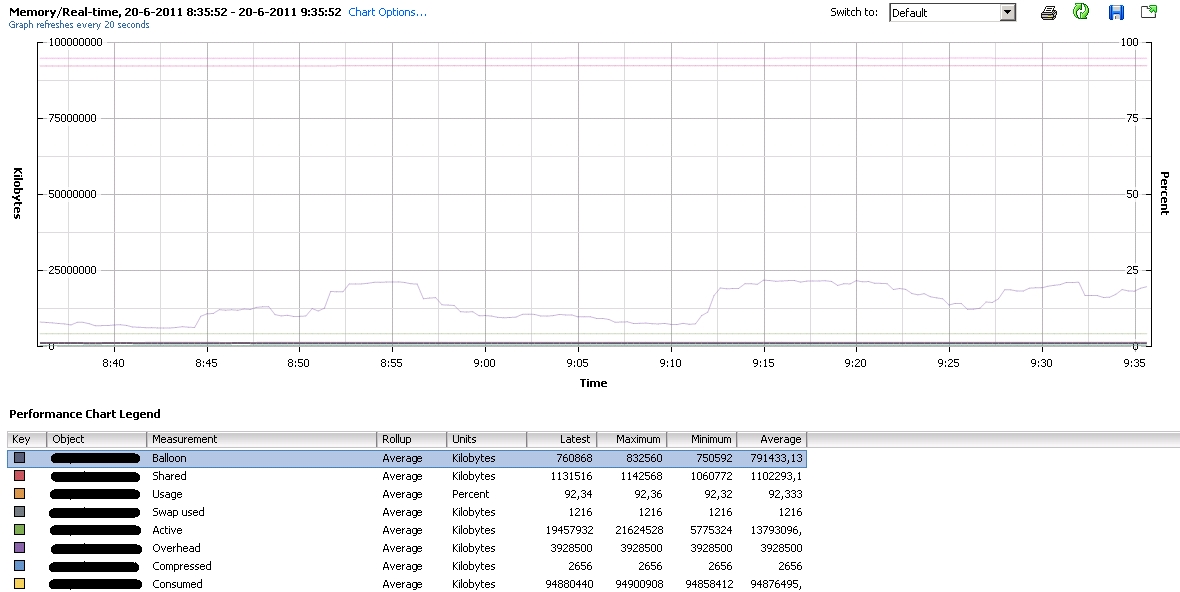 Memory Graph for a VM

Perform the following steps to create a real-time graph for a virtual machine's memory usage:

This is an example of a Memory Graph for a VM that is quiet: 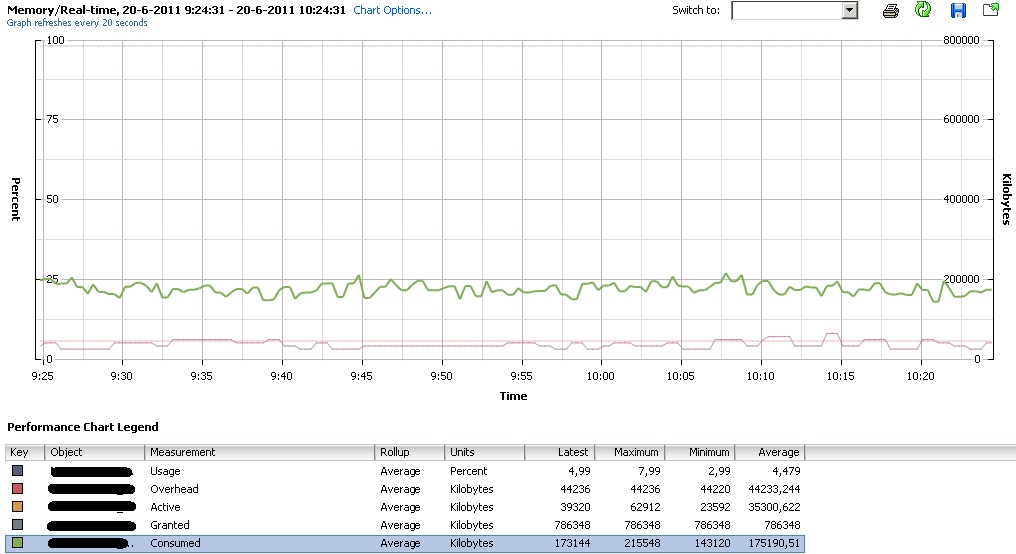 This is an example of a Memory Graph for a VM that is busy (as in a high usage/active percentage): 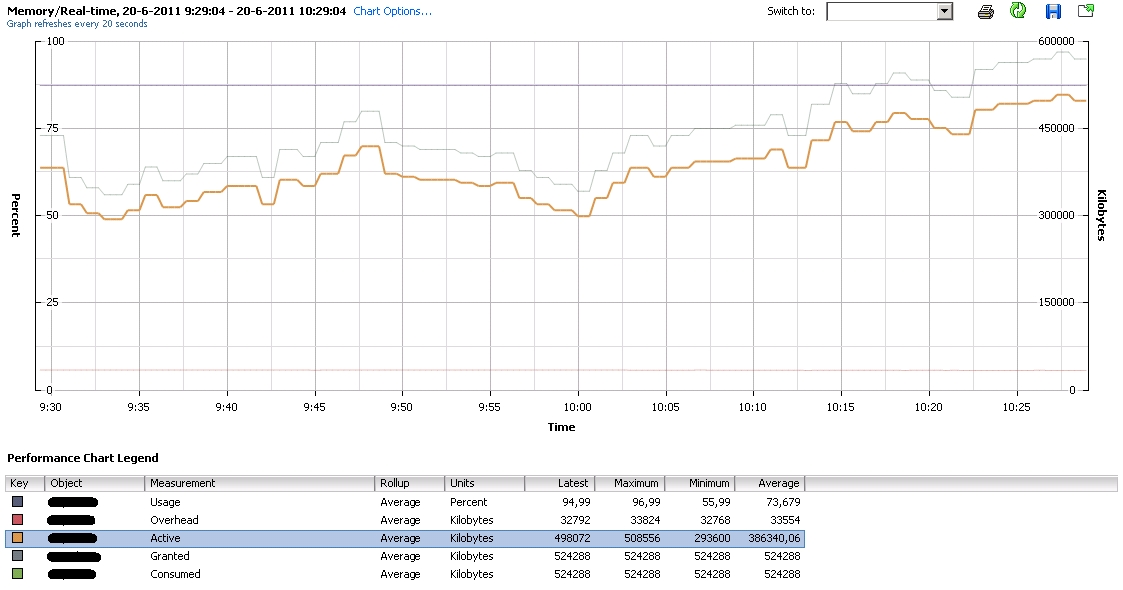 This is another example of a Memory Graph for the same VM that shows that a high usage/active memory doesn't necessarily mean that the VM will start ballooning and swapping: 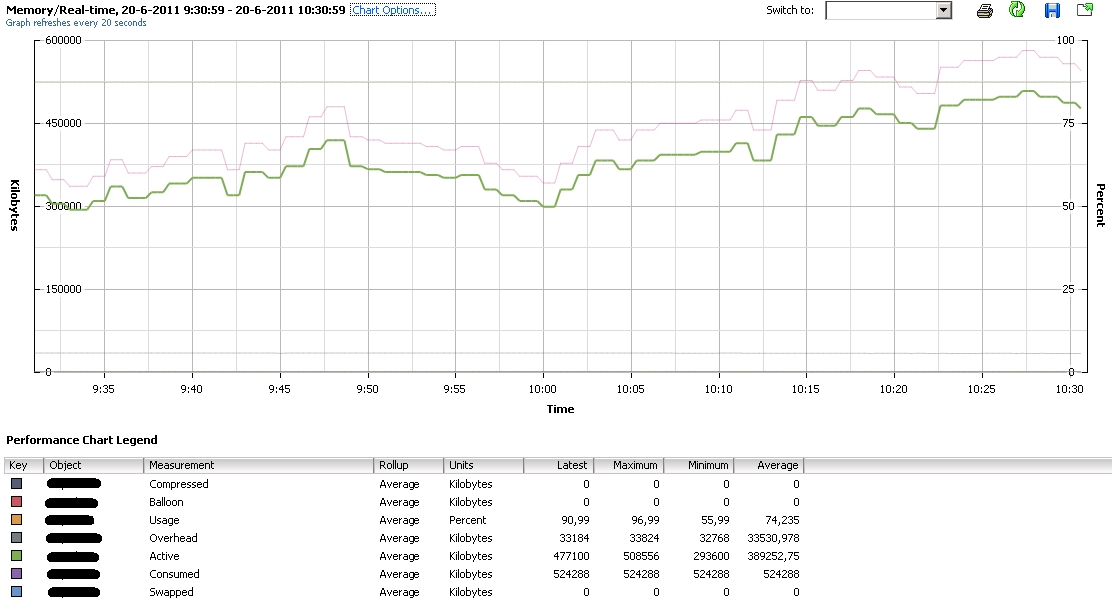 This is an example of a Memory Graph for a VM that is busy and that is ballooning and swapping: 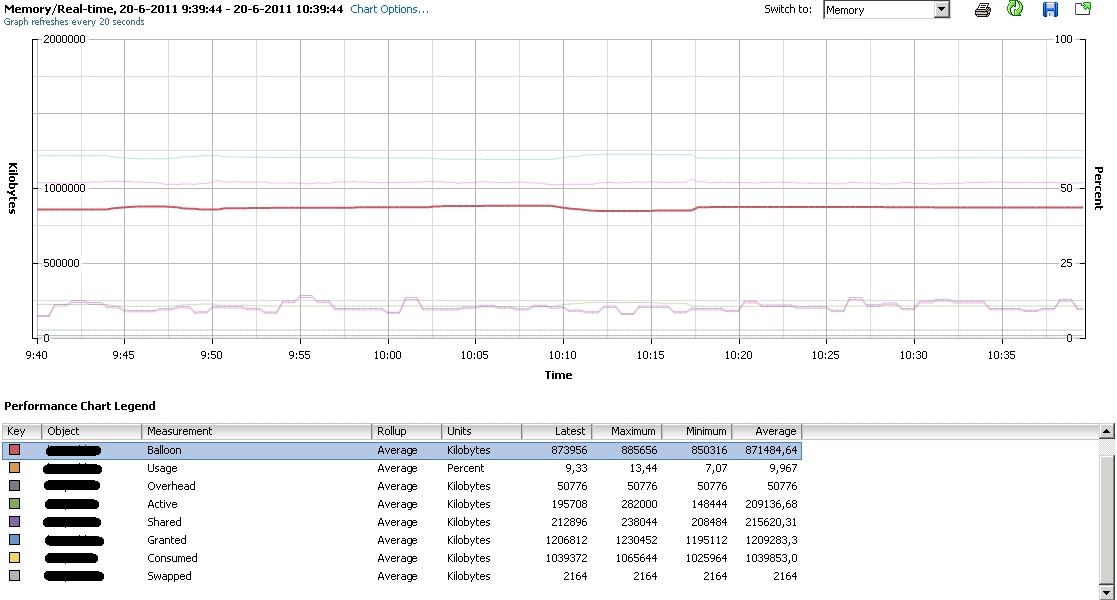 Amount of machine memory used by VMkernel for core functionality, such as device drivers and other internal uses

Amount of memory consumed by a virtual machine, host or cluster

Amount of memory that is actively used, as estimated by VMkernel based on recently touched memory pages

Memory (KB) consumed by the virtualization infrastructure for running the VM
For each running virtual machine physical memory gets reserved for its virtualization overhead. The amount of overhead depends on the number of the total memory size and the number of virtual CPUs assigned to the VM. For example:

Amount of memory that is used by swap

See the Swapping section below for more information about swapping.

Memory usage as percentage of total configured or available memory

Amount of guest memory that is shared with other virtual machines, relative to a single virtual machine or to all powered-on virtual machines on a host
See the TPS:_Transparent_Page_Sharing section below for more information about memory sharing.

Amount of memory allocated bu the virtual machine control driver (vmmemctl), which is installed with VMware Tools
See the vmmemctl:_Balloon-Driver_Mechanism section below for more information about ballooning.

Amount of memory compressed by ESX
When memory is overcommitted and virtual pages need to be swapped, ESX first tries to compress the page. Pages that can be compressed to a kilobyte or less are stored in the VM's compression cache. Accessing compressed memory is faster than accessing memory that is swapped to disk. Usually it will not reduce performance significantly.
Memory compression is enabled by default, and settings can be changed in the advanced options of the ESX host under Mem.MemZipxxx.

The VMkernel scans memory pages for duplicate pages and when detected arranges for them to be shared. It treats them like “copy-on-write”. They are read-only while being shared, but return to being private copies after being written.
TPS works by creating a hash table that has a hash value for each page (4KB) of memory. If identical hashes are found, a bit for bit comparison is performed to ensure they really are identical. Obviously, these comparisons take CPU and resources, so by default the duplicate detection is performed over a period of 60 minutes. This means that memory pages become shared over time and that if you plan on suspend/resume or power off/power on VMs on a large scale you won't benefit from this function all that much.
However, when running multiple VMs with the same OS on the same ESX host it will save you a lot of memory on OS pages. Also, Windows Server 2008 allocates it's full configured memory on boot and writes zero's to it. This causes huge memory savings when combined with TPS.

ESX/ESXi hosts use swapping to forcibly reclaim memory from a virtual machine when the VMmemctl(balloon) driver is not available or is not responsive.
Swapping is, to put it simply, using a swap file to act as memory/RAM for the machine. Using a swap file as memory for a VM is Much slower than using the physical RAM so it is usually something you don’t want to happen. The guest memory is “swapped” to the swap file instead of physical memory. The host will force the VM to swap when the balloon driver is not able to reclaim the memory.

Swapping will also occur if you set a limit on your memory resources in a VM that is less than the configured memory for the VM. If you use “Edit Settings” → “Resource tab” on a VM, you can set the memory limit, which tells the VM how much host physical memory it may use. If you set that to be less than the configured memory allocation, the VM will make up the rest of the memory in swap. So:


This can SERIOUSLY impact performance, because in opposite to guest swapping, with kernel swapping there is no way for the OS to decide what will be swapped and what should stay in the memory. You can easily end up with critical memory areas being swapped out to the disk (like services or even OS memory). This is how that looks like in the resource allocation tab: 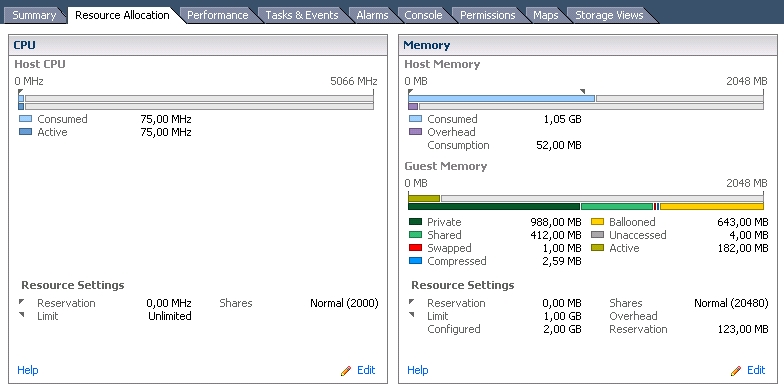 UPDATE: I just read something about memory counters from VMware (see resources). If you want to see current swapping check the “swap in rate” and “swap out rate”. Swap in rate is the rate at which memory is swapped from disk into active memory during the interval. This counter applies to virtual machines and is generally more useful than the swapin counter to determine if the virtual machine is running slow due to swapping, especially when looking at real-time statistics.


NOTE TO SELF: So swap in is from swapped memory to active memory.

By default, a maximum of 65% of a guests virtual memory can be ballooned, if the reservation is not set too high. But what if, for example, the reservation is set below 35%? The amount of memory that is reserved will never be taken away by ballooning or swapping but what can happen to the part in between? That will be swapped. Consider this example:

Reclaiming of memory is done by ballooning or swapping. The VMkernel will try to keep 6% free (Mem.minfreepct) of its memory. When free memory is greater or equal than 6%, the VMkernel is in a HIGH free memory state. In a high free memory state, the ESX host considers itself not under memory pressure and will not reclaim memory in addition to the default active Transparent Page Sharing process.
When available free memory drops below 6% the VMkernel will use several memory reclamation techniques as explained above. The VMkernel decides which reclamation technique to use depending on the configured settings. ESX uses four thresholds high (6%), soft (4%), hard (2%) and low (1%). In the soft state (4% memory free) ESX prefers to use ballooning, but if free system memory keeps on dropping and ESX reaches the Hard state (2% memory free) it will start to use swapping.

Note that memory that is ballooned or swapped can be found in the performance tabs under exactly these names. Keep in mind that this means it was transferred to these states somewhere in the past. If you notice these states it does not mean it's still ballooning or swapping. Also note, that as long as these memory pages are not accessed again they will not be swapped out.


This is an example of a VM that is seriously swapping in and out because of a misconfiguration where the limit is set below the configured memory: 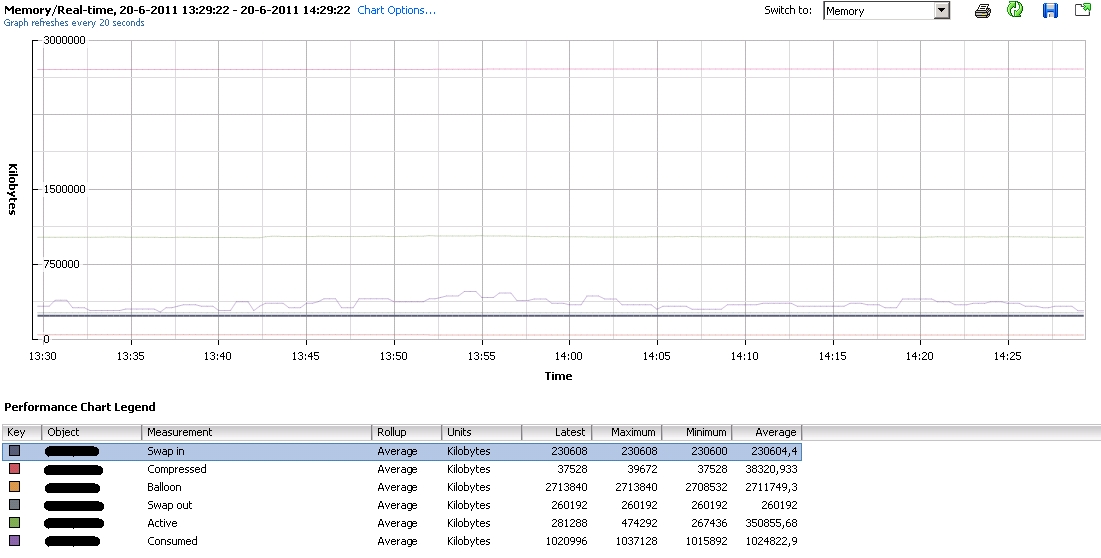 vmware, performance, hardware
You could leave a comment if you were logged in.
vmwarememorymgmt.txt · Last modified: 2021/09/23 22:25 (external edit)